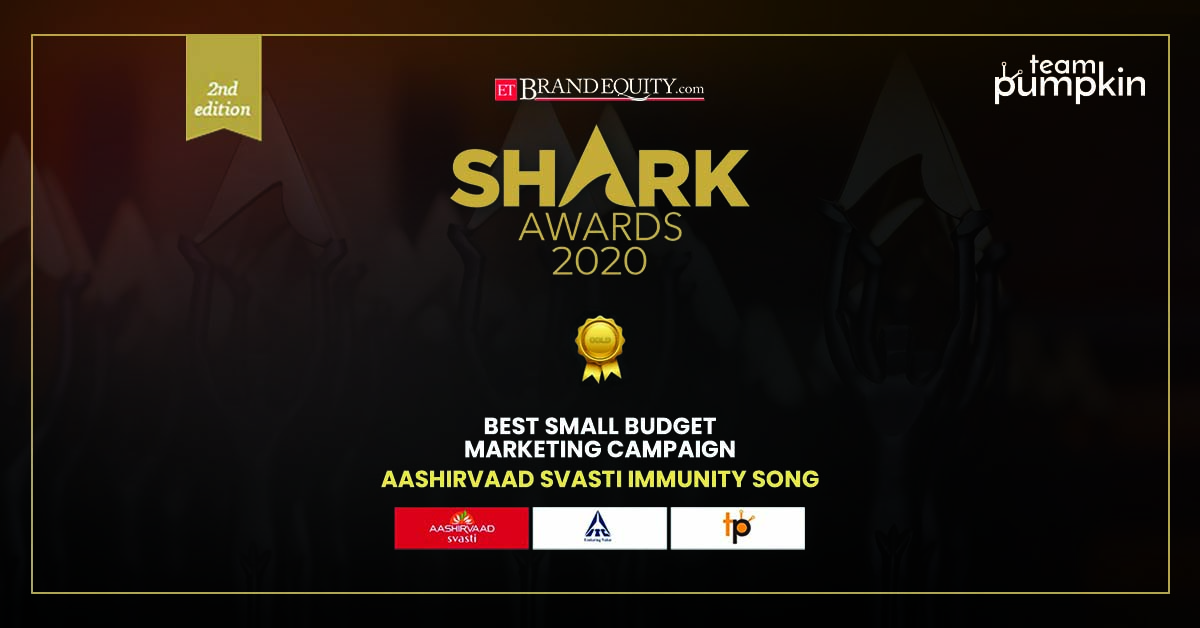 Another medal bagged for the mantle! Team Pumpkin has won a gold for the Best Small Budget Marketing Campaign at the ET BrandEquity Shark Awards 2020 for their work on the Aashirvaad Svasti Immunity Song. The Covid-19 pandemic not only turned lives upside down but also greatly affected product sales for many brands, Aashirvaad Svasti Milk being one of them. To counter this drop in sales, the Aashirvaad team at Team Pumpkin decided to take a unique approach &amp; the Aashirvaad Svasti Immunity Song was born! With mothers more focussed on their children’s health &amp; concerned about providing adequate immunity substitutes, the team recognised a gap that needed to be addressed.

Even during the unprecedented times, the team cracked the code of connecting with people’s heart by being resilient and continuing investment of knowledge about the latest trends!

For this purpose, a fun, informative & catchy jingle, the Aashirvaad Svasti Immunity Song was created for the markets in Bihar & Bengal. Created using local languages, the song was developed keeping the local flavor in mind, in an effort to communicate the message of immunity & purity to mothers & kids, and to reach a larger audience. Simplicity being key, the campaign was executed as a two-line jingle in Hindi & Bengali and released on June 1, World Milk Day. To make the most effective use of all platforms, the ‘Immunity Song’ was released on Instagram, Facebook & YouTube in partnership with Alive & Fever 104 FM. Seeing a highly positive reaction to the initial clip, the ‘Immunity Song’ was developed into a full mash-up song & released digitally on June 21, World Music Day! Reaching more than 12.4 million people with a brilliant combination of creative ingenuity & innovation, this small budget campaign saw some big-budget results! A win for the ITC Aashirvaad team & a moment of pride for everyone else at Team Pumpkin, this uniquely creative campaign is a lesson in making a big bang with a small buck! Check out the award-winning ‘Aashirvaad Svasti Immunity Song’ at while we continue to work hard to execute many more such innovative ideas.

Keep in the loop
(no nagging, promised).